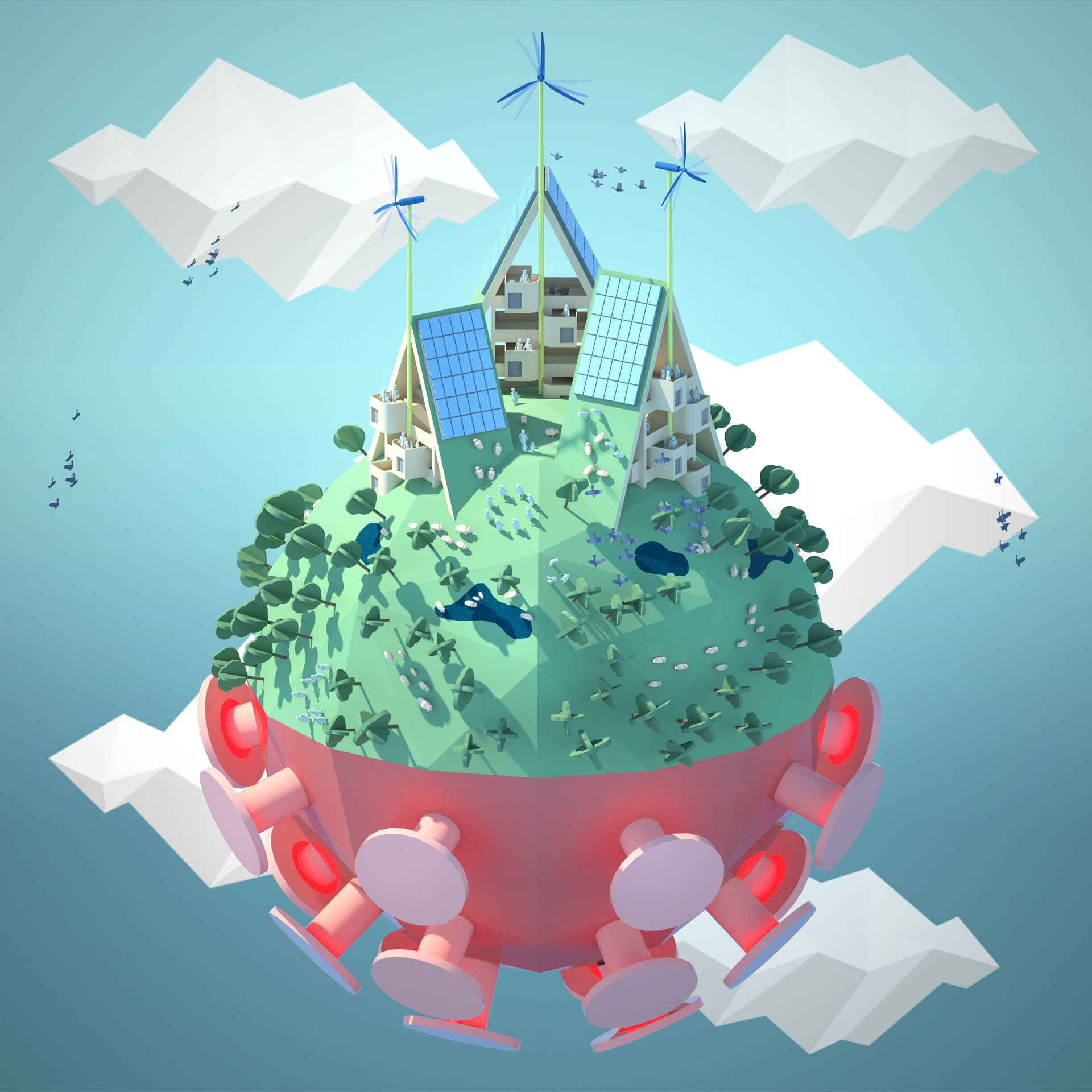 The pandemic of COVID-19 could be seen as a speedlight fast track metaphor for climate chance. Both the viral infection and the socio-ecological meltdown will be curbed and resolved when humanity will fully embrace the need for coordinated collective action which is triggered by empathy and the understanding of complexity.

Like SARS before, COVID-19 is a virus that has “jumped” species moving from animals to humans. Whether from snakes, birds or bats scientists are working around the clock to trace back the virus’ origins in order to unlock essential clues to define a therapy. As its simplest level of analysis, COVID-19 provides additional evidence that human and natural systems are interlinked and that the level of fragility/robustness of natural ecosystems has a direct impact, more or less severe, on humans. Beyond the evidence of humans’ connection to natural ecosystems, the ongoing unfolding of the COVID-19 pandemic, provides other relevant keys to better understand human behaviour and the path ahead for its evolution.

The story of Coronavirus comes from complexity and heads towards more complexity. It has its roots in the anthropocentric exploitation of wild-animals to supply a segment of the food market where extra value is identified in the exotic and rare nature of game meat. Such market segments are poorly regulated and poorly assessed in terms of sustainability. In other words the complex collateral effects of eating wild and rare animals is ignored, both in respect to the natural ecosystem the animals are taken from, and in respect to the human systems in which the product is introduced into. The reason why such market segments continue to exist is because of certain human narratives. Large groups of humans are convinced that eating rare and exotic animals is right. Humans are pattern creating, meaning seeking creatures and human narratives have been interwoven themselves in and out common sense and science throughout the evolution of Homo Sapiens. The same amount of nutrients that came from the exotic rare game meat responsible for COVID-19 could be extracted sustainably from other sources yet because of powerful human narratives, we end up eating weird stuff that eventually kills us. This is not to say that avoiding exotic and rare game meat will spare us from pandemic but it is meant to reinforce to be ware of what we don’t know we don’t know. On the impact of highly unlikely risk I would strongly recommend Black Swan and Skin In The Game by Nassim Nicholas Taleb.

As Taleb argues in Black Swan, if we respected the complexity of what we don’t know that we don’t know, we would drastically reduce our exposure to highly unlikely and highly impacting events otherwise known as Black Swans. Quite the opposite, our society seems obsessed with what we think we know to the point of bending our perception of reality to match our beliefs. Where humans should maximise their collective awareness of complexity and ecology, the linearity of unfounded narratives takes precedence. From Coronavirus to Climate Change, the importance of reframing human culture in the context of complexity and empathy is crucial. Empathy is the evolutionary tool to handle complexity intuitively. Complexity and empathy go hand in hand like yin and yang, Apollonian and Dionysian, sense and sensibility, science and art… and so on and so forth. Without empathy, and more specifically mirror neurons, predators cannot “feel” how a potential prey might behave and will be unable to end successfully a hunt and feed their young. Without empathy early humans could not have organised themselves in more and more complex social structures, like clans and tribes, and would not have overcome the risk of much larger and stronger predators. As effectively argued by Jeremy Rifkin in the Empathic Civilisation and contrary to a simplistic take on Darwinian theories and evolutionary biology, empathy plays a crucial role in the evolution of species.

Yet empathy seems at odds with our main cultural framework, based on anthropocentrism, individualism and neoliberism. Since the emergence of humanism in the 15th Century, human intellect, applied to science and technology, has been the dominant narrative framework for humanity. Behind our humanistic shield we bounced off the evidence of a wider and more complex web, a web perhaps too difficult to explore with the computational power of human brain alone. Whilst empathy provides powerful subconscious insight in the behaviour of organisms and systems other than ourselves, it is ultimately dependant on perception therefore hard to implement in the realm objective sciences. In the evolution of their cognitive powers, humans possibly needed some extra help to manage complexity beyond the intuitive insight of empathy. In Chaos, Making a New Science, Jeremy Gleick highlights the emergence of chaos theory from Lorenz’s equations and Mandelbrot’s fractals in the ‘60s and ‘70s. Besides the exquisitely human ingenuity required to imagine the possibility of order in apparently random behaviours, the importance of digital computing should not be underestimated. Hand calculators first and personal computers later proved essential extra brain power for humans’ evolution towards the beginning of a rational and objective understanding of complexity. Intuitively first and objectively then, humans have today great tools to embrace the interwoven web of life that holds together the biosphere. On the other hand, the fact that scientists have started to pin down the mechanics of complexity, does not necessarily mean that the weight of linear narratives has been lifted from the entirety of humanity’s consciousness. And it shouldn’t. Different levels and types of consciousness co-exist at once as much as different kinds of narratives and social constructs live alongside, more or less peacefully. As effectively pointed out by Yuval Noah Harari in Sapiens and Homo Deus, narratives are essential for human systems to function as they provide intersubjective truths for individual to agree upon. The opportunity is therefore not to replace human narratives with almighty artificial intelligence but rather to go back to culture, the single most important narrative for humanity, and embed complexity and empathy in our core cultural values.

Are complexity and empathy going to help fight back COVID-19? The answer is: yes, and not just COVID-19 but also Climate Change.

In the last few weeks, scanning through newspapers and social media, it is interesting to notice a recurrent pattern in how different social narratives make humans react to the pandemic. At first there is denial, then fear and more or less selfish action, then come embracing of complexity and empathy.

Chinese citizens fully embraced the use of breathing masks and protective clothing, in ways and fashions not necessarily effective. Italian students enrolled in the northern Italian universities, despite the very clear instruction to stay at home to limit the spread of the virus elsewhere in the country, jumped on trains to go to their parents’s home elsewhere in Italy (and reach the protective all-encompassing powers of the mamma), in ways and fashions not necessarily effective to contain contagion… quite the opposite. British citizens, despite being recommended to avoid panic-buying, stressed logistics and supply chains, clearing the supermarket isles of toilet rolls, hand detergents and sanitisers, effectively preventing other citizens to stay clean, wash their hands, thus increasing the risk of viral spread. In light of the poor political response to the Paris Agreement pledges, a growing number of Americans students are more and more scared for their own future and have taken it to the streets with Fridays for Future and other movements.

According to the latest data coming from China, the pandemic has peaked about two weeks ago and the number of new cases has diminished dramatically. The management of the viral spread resulted from the combined action of top-down government policies and bottom-up citizens’ responsible collaboration. Globally the pandemic is in full swing and both alert and risk cannot be underestimated yet the fact that China has managed to curb the exponential curve is a key factor to find a way through this crisis. Italian society, from show-biz to sport, from religion to business, have found new solidarity and, almost overnight, government and an increasing number of citizens have started coordinating actions to reduce the burden on the health service, which has responded with greater efficiency. The positive impact of united action should be emphasised also to counter the dysfunctional impact of fake news and fear mongers. Similarly, European businesses have mobilised to allow remote working and reduce the probability of contagion. Emergency budgets have been put in place to mitigate the negative impact at social and economic levels. Countries and citizens have stepped up embracing the intricate complexity of the situation. Coordinated and collaborative action will no doubt have a positive impact in the fight against COVID-19. As for the parallel to Climate Change, we can only hope that the next COP26 co-hosted in Scotland will experience a similar level of mobilisation from both governments and citizens. Drastic measures are required to bring climate change within the +1.5°C threshold and avoid far larger economic and human losses.

Humans have demonstrated throughout evolution extremely high level of social cohesion and collaboration. In a few months, COVID-19 has triggered individual reactions at global scale because it affects the ultimate core value of our collective narrative, which is ourselves, our own health and happiness. Humans have reacted accordingly to the scale of the threat. Because the impact of COVID-19 is complex, empathy and cooperation are the most effective policies to manage the emergency. Unlike the coronavirus pandemic, in more than thirty years, Climate Change has not triggered a reaction proportionate to the threat probably because it does not immediately affect the core-values of the anthropocentric-neoliberal paradigm of our societies. Climate Change needs a even higher level of empathy to be understood compared to COVID-19. Only if one is able to empathise with a flooded village thousands of miles away, with the dying last male white rhino of a practically extinct species or with the future of fellow humans yet to be born, then she or he will suddenly understand the scale of the global threat Climate Change poses for all life on Earth. And she or he will act accordingly.

Selfish and linear narratives have only kicked the can down the road, delayed coordinated and collaborative action and made the emergency harder to tackle. Although the pandemic is still on the rise in most of the world, on the basis of the latest data coming from China, it would seem that humans are well equipped to fight back COVID-19. We most certainly hope so.

In the words of the World Health Organisations Director Dr Tedros Adhanom Ghebreyesus “Pandemic is not a word to use lightly or carelessly […] We have never seen before a pandemic sparked by a coronavirus […] and we have never seen before a pandemic that can be controlled at the same time [WHO has] rang the alarm bell loud and clear”. In Ghebreyesus’s words the time is for urgent and aggressive action. Our consumptions, social relationships and behaviours needs rethinking. Let’s take this chance to re-write our social narratives. Let us evolve beyond the linearity of Modernity to bring back empathy and complexity at the core of our culture. May our communal struggle with COVID-19 also mark the emergence of a united global culture to act on Climate Change.